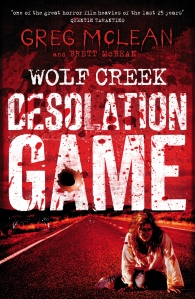 Mick’s learning, and his schoolroom is a war

When sharpshooter and killer Mick Taylor searches for a place to keep a low profile, he finds somewhere where his peculiar talents are appreciated: a war. And in Vietnam, an out-of-control sergeant takes the amateur murderer and turns him into a pro.

Back home, Mick makes use of the sick lessons the army taught him, when hapless tour operators bring a Kombi-load of sightseers out his way into the Western Australian desert. Two suspicious flat tyres deliver an engaged Japanese couple, a father and son, a US army vet and his girlfriend, and a couple of cute girls to Mick’s lair. Middle of nowhere, population one. The group finds themselves in hell, as Mick makes sure their once-in-a-lifetime tour stays that way. And though one of the drivers escapes and goes for help, Mick sees no reason to stop the killing spree.

In the second Wolf Creek prequel novel, the cult film’s writer/director Greg Mclean and horror writer Brett McBean get to the heart of Australian horror’s most terrifying psycho killer. Is Mick Taylor possessed by some dark power in the landscape itself? Something ancient? Does the Red Centre demand blood?