JUNGLE:
n  1 any dense or tangled thicket or growth
2 a place of intense competition or ruthless struggle for survival

We’re trapped in a world of modern convenience, of steel giants and oceans of concrete. For the most part we’re content to live in this colourless existence. But we’ve paid for our comfortable lifestyles. Instead of looking out our windows and seeing a forest of trees, we see a forest of buildings; instead of a clear flowing river, we see rapids of asphalt and an endless stream of vehicles cascading along its surface. Smog chokes the once clean air. Noise pollution drowns out the birdsong. It’s a jungle out there, but not in the way nature intended.
Which is why nature has decided to take back control.

Welcome to the new world.

A world in which the land has reverted back to jungle, where you no longer fight for a parking space, but for your life; where supermarkets have become places of savagery and your next-door neighbour looks at you not as a friend, but as perhaps their next meal.
A world where survival is reserved only for the fittest…and for the cunning.

Welcome to the jungle.

In a series of three novellas, Brett McBean takes a look at life in the modern world and turns it inside out. He transforms the common into the uncommon, the banal into the unreal, as everything from a multi-level car park, to a typical suburban sprawl become dangerous hunting grounds.  Forget TV dinners and 50% discounts at your local Target – it’s a fight for survival as nature takes over your homes and shopping centres.

Dense jungle reclaimed the Earth four years ago and civilization has been fighting for survival ever since. Without law and order chaos rules the world, and in the struggle between good and bad, good doesn’t always win.

Three animalistic tribes have emerged from the initial barbarity: the fiercely territorial lions; the malicious tree dwellers; and the subterranean tunnel dwellers. Having adapted to their strange, new environment, the tribes fight to become the dominant force, fight to be crowned the new kings of the jungle.

Still, even with the dawning of this new age, pockets of humanity remain. Vastly outnumbered, they scavenge for food and clothing just to stay alive, clinging to the rumour that salvation lies beyond the jungle. Their only hope is to escape.

But hope is in short supply.

This is Mother Nature’s domain and she doesn’t give up her subjects easily. 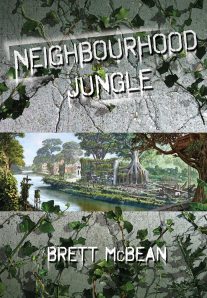 Six months have passed since the arrival of the New World. A world plunged into primitive living overnight.

Within this wild and dangerous landscape live two types of survivors: those attempting to restore civilisation, a sense of order and normalcy; and those who have embraced the jungle, governed by new rules, doing anything to survive.

For the group living in the remains of a supermarket – now a make-shift hospital and refuge – their attempts of a safe, ordered life has so far been successful. There’s an adequate supply of food, with injuries and maladies being treated as best as possible by the local doctor. Their main concern is the gang living in the ruined Blockbuster across the river. As wild and untamed as the jungle that has taken over the once-thriving suburban shopping strip, the gang kidnap and murder at will, hanging what remains of the dead from a nearby fast-food sign.

So far they’ve left the small community alone, but it’s only a matter of time before the gang’s blood lust brings forth a deadly confrontation.

In the jungle, only the fittest survive. Welcome to the neighbourhood.

It’s late. A few remaining shoppers head for the multi-story car park after attacking the sales at an adjacent shopping center.

However, they become trapped in the underground bunker when, incredibly, trees start to sprout from beneath the car park, transforming the concrete structure into a ruined, maze-like cavern.

Unable to find a way out it becomes a struggle for survival, for not only does the car park continue to transform back into a jungle, wild animals have begun to appear, governed by hunger under the foliage canopy. Now the humans must fight to survive — not only Mother Nature, but a foe just as deadly … each other.